Socially Engaged Practice: An Evening with Sister Ayya Yeshe May 3, 2016

The Riverside Sangha is happy to announce that Sister Ayya Yeshe will join us Tuesday May 3, to share her experiences in 'socially engaged practice' in India,' as a Buddhist Nun.  Sister Yeshe is ordained in a Tibetan tradition, and also received ordination as a Bhikshuni from Thich Nhat Hanh at Plum Village.  She is a founder of the Bodhicitta Foundation.

She says that "I am an Australian Buddhist nun and I work for Bodhicitta Foundation, a charity that works with ex 'untouchable' Indian Buddhists in the slums of India. We have a program that empowers adolescent girls to become change makers and social workers, women's job training, and change the lives of 2000 people per year. I was ordained by Thich Nhat Hahn as a Bhikshuni in 2006 and have been to Plum Village three times. I am a socially engaged nun and practice mainly in the Tibetan tradition, but I think of myself as fairly non sectarian. I enjoyed practicing with Thay's sangha (among others) before I ordained in 2001. Sister Chang Khong has often given us dana to help in the slums and I know Shantum Seth, who is part of the Order of Interbeing in India, of which I am a member."  See www.bodhicitta-vihara.com for more on Sister Yeshe and her work.

We will offer our Dana for that evening to Sister Yeshe. 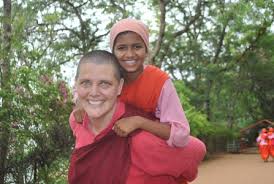 RSVP: to David Flint, davidrflint@gmail.com  [RSVP helpful, but not necessary.]
Posted by David Flint at 4:40 PM